I recently gave in to temptation and bought a PS3. Got a package with InFamous, Killzone 2 and Resistance 2. Loving it so far, definitely still keeping the Xbox 360 as well though.

Anyway, onto the real reason I was posting this. I’ve been looking for ages now for something that would play MKV files without any hassle… even muxing was becoming a pain in the arse as certain things still wouldn’t stream (depending on filesize and various other weird factors).

These are the things I’d tried to stream from (through the PS3 or Xbox):

Windows Media Player 11 – Extremely fast and nice to use when it worked, however, it didn’t support mkv or some older versions of DivX/XviD.

TVersity – Played everything I could throw at it, but it was totally unusable for MKV or any HD content. If I tried to pause, fast forward or rewind I just got a black screen for over 5 minutes until it started playing again.

Finally, I’d heard great things about PS3 Media Server but I wasn’t getting my hopes up too much as I thought it would be so similar to TVersity… how wrong I was! I don’t want to speak too soon, but so far after a few days of usage it’s been flawless. Plays everything I’ve thrown at it, relatively fast at transcoding when it needs to (not instant but it’s definitely short enough to be usable).

Another cool feature is the ability to go into the #–TRANSCODE–# folder and select which subtitles you want to use if a file has subtitles.

Best of all, it’s totally free. Plus because it’s written in Java, it works on Windows, Linux or Mac (I’ve only tested the Windows version though).

Here’s a screenshot of the main status page. I’m sure there’ll be plenty of images of the other screens around the internet, but if anyone wants to see any more just leave a comment. 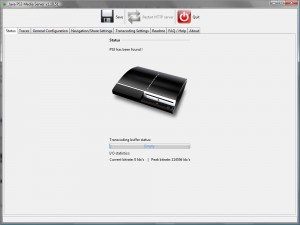 So if you’re looking for something to stream any media from your PC (videos, music, pictures) to your PS3, then give PS3 Media Server a try! You won’t regret it. I know I didn’t anyway 🙂